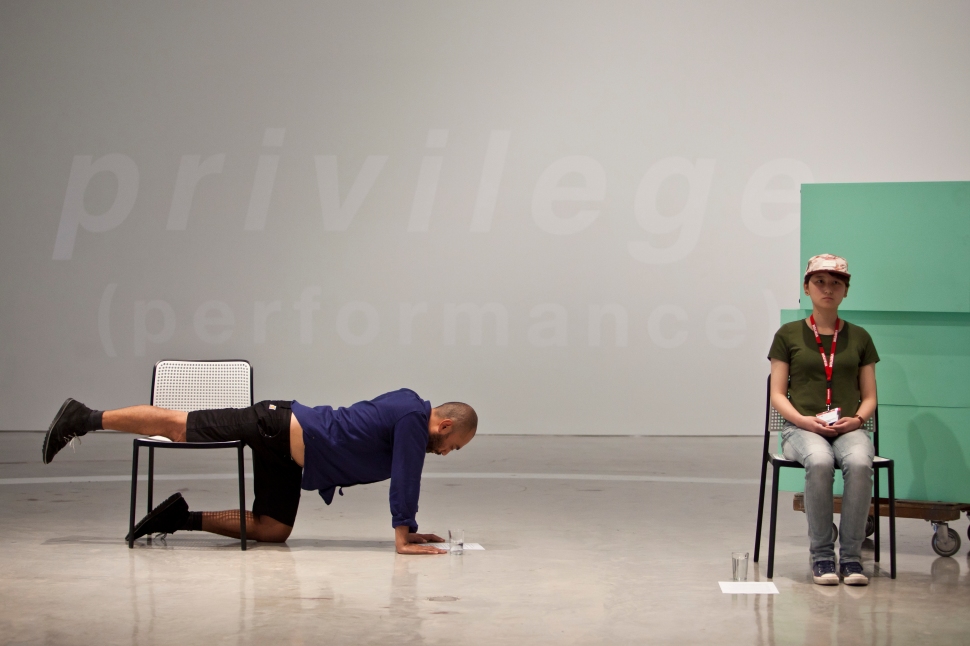 (sent as an email)

You are invited to Privilege (performance)

Privilege (performance) will fall between ten in the morning until five in the afternoon. And by fall I mean that one thing will begin, and another thing will begin to replace what was begun.

There are no ends, no endings and no point.

There is however a bicycle of openings, a circle of newness – constant life – A Planet With Two Suns* – It isn’t as bleak as it sounds.

Like the game of Chinese Whispers, Privilege (performance) is a moving document, where six days of performance from six different artists have been read by me. What has been read have been physical accents, auras and/or actual objects selected either on chance; personal taste; by accident and/or by moment of reception.

These extractions have been flattened inside my head and on paper into a collage of text imagery.

By reading I mean a reception of performance as flattened by its literal transcription of pen on to paper – this deceptively two-dimensional transformation ever ready to be inflated by another reader and reformed into something inherently and uniquely other.

The reception of the imagery is as deep as the receiver. This is not a theatre of embodiment, it is a theatre of pure surface, of first impressions, it is the spectral aura found in the display of a handsome shop front window – you the audience of my readings is the window shopper in the vehicle of his desire, transporting himself or his father into the presented dress and out onto a romantic field in Devon.

All directed visual stimuli is based on this simplification of pure illustrated information.

The performance is essentially the text as derived from my readings, inflated into a kinetic three-dimensional relief of my breath, warm blood and beating heart.

I look forward to this imminent failure.